Sexing up the statistics. Who needs facts? 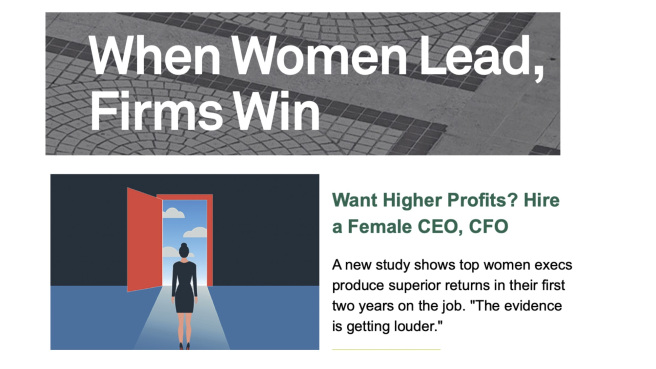 “Want Higher Profits? Hire a Female CEO, CFO” The article headline caught my eye. Aren’t we all looking for a magic ingredient that can guarantee financial success? I think that women are disadvantaged and undervalued in business. And this doesn’t have to be the case. The last CEO I appointed was a woman – in a male-dominated industry – and the last board I chaired had a majority of female directors. So, I read this article with great anticipation.

The article is based on a research report1 by S&P Global, entitled even more eye-catchingly: “When Women Lead, Firms Win”. This is shown by the statistic that: “In the 24 months post appointment, female CEOs saw a 20% increase in stock price momentum…”

So, your investment strategy should be to buy stocks with newly appointed female managers! Ah no, the report rebukes you for drawing this obvious conclusion; “…we admonish the reader to interpret the results as a descriptive analysis, relevant from a governance standpoint, but not providing evidence of a predictive trading signal.” Maybe they don’t quite have the confidence in their own research?

The study goes on to suggest that one driver of female-led out-performance is that females are held to a higher standard than males, so like-for-like female executives are better: “…females in C-suite positions are consequently more talented.”

Naturally, I wanted this all to be true. But something about the scale of the claim and the certainty didn’t ring true. I wondered if the statistics were that definitive? Had those headlines been sexed up?

The study2 is a large one, based on the Russell 3000, a benchmark for the whole US stock market, over the last 17 years and encompassing over 5,800 new executive appointments, of whom 90% were male. It looks for changes in company performance in the two years3 post a female executive appointment4.

In summary, the results seem to show that;

What conclusions does the research make?

Sadly, the research makes the most basic of statistical errors. Correlation does not imply causation8. The fact that two sets of data appear to move together does not prove that one causes the other. This is particularly pertinent where both different results are cherry-picked to highlight those that fit the argument, and there is not a robust hypothesis tested to explain the mechanism involved.

The research’s headline claim is that female CEOs deliver a 20% increase in share price momentum. However, this is only true looking at the 6 month momentum. Even then, this result is statistically ‘significant’ at only the 90% level, well below the standard test of a 95% chance of it not a being random event. The 12 month momentum shows improvement of less than half the 20%, and is not significant at any level.

The next major claim in this research is that new female CEOs improve their company valuation (ie reduce the book/market value ratio) over their first two years versus those of new male CEOs. However, the research finds no evidence of a significant gender-related improvement in market capitalisation, share price momentum or profitability, and so it’s not clear where this rating improvement derives from. One answer could be in the finding that new female CEOs increase leverage, which can assist in improving company valuations, whilst raising financing risk.

Confusingly, the graph of average residual returns in the research appears to show that new female CEOs companies are generally under-performing against equivalent males. This finding, whilst unlikely to be statistically significant, seems to undermine the central conclusion. 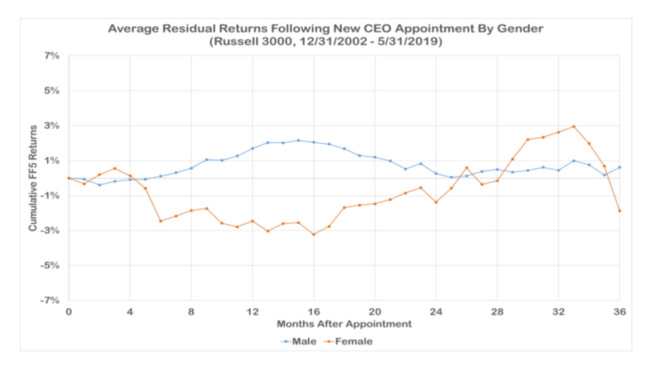 So where did those headlines come from?

Contrary to the article headline, the research does not claim that female CEOs deliver higher profits. However, the research itself is also guilty of wish-fulfilment and outcome-seeking. There is no evidence that “When women lead, firms win”. In fact, the predominant evidence is that the sex of a new CEO is not a significant factor in company success. This is as you would expect. If sex were a dominant factor, life would be so much easier for Nomination Committees. Business – as with everything in life – is so complex that no one factor about a person is likely to have an overwhelming predictive effect on a company’s performance.

The research’s major claim is that new female CEOs see a 20% increase in stock price momentum. However, the report’s own data doesn’t support this conclusion9, nor would this be a robust long-term performance indicator in the absence of any improvement in either profitability or market capitalisation10.

Is it still possible that the average new female CEO is better than their male equivalent?

It is certainly possible than new female executives are better than equivalent males, and it is possible that female CEOs drive superior company performance. It is possible that the data on financial performance is so noisy that it would not be evident statistically. However, at this stage, there is no robust evidence for this.

This is one of many pieces of research12 that appear to be aimed at proving that females outperform males in senior roles. Studies like this should be invaluable sources of understanding about how business works, how prejudice harms decision-making and how business can create value. However, wish-fulfilment, the selective use and hyping of inconclusive statistics helps no-one, merely pandering to media and political prejudice against business.

I think females are discriminated against and constitute vast under-utilised talent. The fact that we can’t prove it doesn’t mean it isn’t true. We need to work hard to counter prejudice and promote women.  We don’t need sexed up headlines to tell us that this is the right thing to do.

2 The statistics are difficult to interpret, particularly how exactly the performance measures are calculated and presented, with little explanation or definition provided. I have interpreted them to the best of my ability in their absence.

3 Two years appears to be a random time frame.

4 The research also looks at new CFO performance, but for simplicity I have focussed on the CEO analysis. If sex were a significant indicator of executive success, you would expect to see that primarily in CEO performance.

6 Defined as Gross profit or EBITDA as % of book assets

7 Interestingly, this is counter to many commentators’ claims that females are more risk-averse and would be more conservative in running companies, particularly in financial services.

9 The research claims that; “These results are economically and statistically significant.” However, this would only be true if the research had started out with a hypothesis that female CEOs improved stock price momentum and then found that the data supported that. In fact, it looks as if the researcher selected seven measures of performance and alighted on the only two that gave him the answer he was looking for. It has two measure of stock price momentum and he has selected the one with a result that fits its conclusion. Test of statistical significance are based upon the likelihood of something happening against a random event. If you choose a measure because you like its outcome, you cannot rank it against a random event, precisely because you selected it. Statistical significance doesn’t work on a ‘pick and mix’ basis.

10 The research does not provide a hypothesis as to how share price momentum is boosted despite there being no improvement in either market capitalisation or profitability.

11 It looked for words in biographies of male executives in companies with ‘positive excess returns’ and then judged the quality of female CEOs by counting the occurrence of these same words in their biographies.

12 The research claims; “The analysis presented herein is one of the most comprehensive examinations, by breadth and time horizon, of gender diversity, to-date.”