Response to consultation on Market Study on Statutory Audit Services 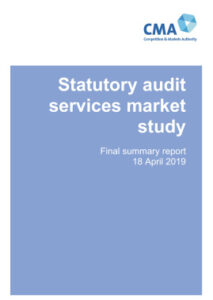 I am responding to the request from the Government for views on the recommendations by the Competition and Markets Authority on the market for Statutory Audit Services. This submission is made in a purely personal capacity.

Over the last 25 years, I have been chairman or director of ten different companies, from small privately owned to FTSE100, participating in over 200 audit committee meetings. I have never worked for an auditing firm, big or small. I am now a non-executive director/Chairman of the Audit Committee at Watkins Jones plc and Chairman of the Audit Committee of Dentsu Aegis Network, as well as a private investor.

There needs to be a clearer understanding that audit is a regulated statutory service. As such companies and stakeholders should rely on the regulator to ensure high quality standards. Failings in the quality of audits are primarily the responsibility of the audit firms and their regulator, not company audit committees. Audit committees should be responding to issues that they see in the conduct of their own audits, and should be allowed to select their auditor based on their own criteria. If shareholders are unhappy with this, then they have the power to influence boards and ultimately vote directors out if necessary.

The CMA Report is heavily UK-centric, failing to take full account that the Big 4 have international arms and associates and that most FTSE350 companies are international. It does however recognise that the dominance of the big 4 firms is an issue that must be tackled globally, or at least on a European basis. It is not tenable to argue that the global oligopoly of the Big 4 can be successfully challenged by measures that affect UK-based firms only.

The CMA report provides no analysis as to why the market has become so concentrated (although its predecessor body contributed significantly by allowing the merger of Coopers & Lybrand and Price Waterhouse in 1998). As a result, the report sheds no light on what will happen if the joint audit proposal is implemented, diverting significantly more revenue to non-big 4 players. How will they react? Will this artificial subsidy turn the non-big 4 into real challengers? The answer is that no-one knows. This is a poor basis for a major change to affect virtually all our 350 largest companies. The CMA should have recommended that this proposal be trialled first to learn what happens rather than rush to rollout a significant untried policy measure.

The most effective and fastest way to increase competition in this market would be to increase competition within the big four by ensuring that each of the big four can always compete for an individual audit. This is not currently the case as often a company already uses one or more of the big 4 to provide tax, advisory or internal audit services. The CMA recommendation to require some form of split between the audit and non-audit services of the big 4 is therefore the strongest recommendation and the one most likely to provide more choice in the short term. The government should also lobby internationally for other countries to require a similar split.

Arguably, the best opportunity for non-big four firms to increase their competition against the big 4 would be by investing in their non-audit work. Developing a strong tax practice or due diligence team is likely to be easier than trying to compete for audit work, particularly as the latter tends to require a strong international network.

Detailed responses to questions posed by the Government

The CMA has not provided any guidance as to what form the ‘standards’ for the appointment and oversight of auditors would be, and therefore there is no basis for this being new powers for a regulator. UK corporate governance hinges on boards, and particularly non-executive directors, exercising their fiduciary duty to operate the company on behalf of members and other stakeholders. There is no evidence in the report of widespread failure by boards to do this. Nor is there any analysis of why individual auditing failures have emerged. Regulation of statutory audit is not the role of boards, who have in fact been let down by the failure of the regulators themselves to do their job. It is therefore somewhat ironic to have regulators trying to increase their own powers to regulate boards with regard to audit quality.

These new powers are not justified by any evidence and so should not be conferred on a regulator.

Shareholders should be engaging with boards directly themselves.

The case has not been made for greater regulatory oversight other than by shareholders themselves engaging with individual companies.

The CMA’s joint audit proposal does not have an evidential basis. Joint audits are voluntarily used by a few companies, but are mandatory only in France. The actual evidence shows very mixed results. For example the Lesage, Ratzinger-Sakel, Kettunen study, ‘Struggle over joint audit: on behalf of public interest?’ concludes that;

“we do not observe a higher quality associated with joint audit, neither on the Danish sample (main analysis) nor on the matched FRA/GER [France/Germany] sample.”

The CMA admits that the effect on quality ‘should be at worst neutral.’ (Final Summary Report. P10). This is hardly a ringing endorsement for a major proposal to improve audit competition and quality.

The CMA’s main objective is to increase revenue for non-big Four firms. It is akin to them mandating that shoppers must purchase half their groceries from an independent convenience store, rather than a supermarket. This proposal would by definition lead to the non-big four firms getting more audits, but is by way of a large subsidy to them rather than through increased competition. There is no guarantee – and no evidence identified – that this will improve the quality of non-big four audits, as opposed to swell their partners’ incomes.

This proposal would be a very substantial change to UK audits and incur considerable extra costs. An incumbent big Four firm is very unlikely to reduce its fees in order to fund a smaller competitor duplicating some of its work. Companies will have two sets of auditors reviewing the same accounts, slowing the process and consuming management time. It would take a long time for the non-big 4 to grow their headcount to cope with even 30% of the audit work of the FTSE 350. The CMA interestingly has made no attempt to model out how much this work would be, how long it would take for the non-big 4 to be in a position to resource this, nor whether such pace of expansion required is feasible.

The CMA has failed to show any evidence that this proposal is likely to be either successful or proportionate. In the absence of this evidential basis, the most that should be proposed is a trial for certain companies or sectors to see if joint audits do have the benefits claimed. This should be followed by a very gradual roll-out if it deemed successful. This would also give more time for the non-big 4 to resource up.

Whilst I believe that the joint audit proposal is a costly and disproportionate measure, I do not see the argument to exempt complex companies. This measure would be most cost/benefit effective if applied precisely to the largest companies and largest audits, as they would transfer most revenue to non-big 4 companies per audit affected. The more complex the audit, the more the learning should be transferred to smaller firms.

Obviously non-big 4 firms would need both to recruit new staff and to improve the overall quality of the staff that they currently have. Inevitably this would require large scale recruitment by them from big four firms. It might well mean that non-big four firms would also have to resign from smaller audits in order to resource the new audits gained. The main results are likely to be inflation in pay for auditors and partners, with a modest growth in non-big 4 headcount. Audit quality is likely to suffer as big four firms lose staff and non-big 4 firms struggle to upscale. Accordingly, the Government would be taking a major risk in mandating a large scale roll out of this proposal.

As suggested above, a pilot scheme involving a relatively small set of large companies would be the optimum next step to see if the remedy works without causing widespread disruption.

If both firms were jointly and severally liable, they would need to review each others’ work. It seems unlikely that they could place reliance on the other’s review. This would reinforce the duplication of effort and increased costs of this proposal.

A joint audit is inherently inefficient, particularly when its main purpose is to give more work to smaller players in the market.

The CMA’s proposals will cause significant dislocation in the audit industry as non-big 4 firms try to grow to meet the increased number of audits required, poaching staff from the big 4. Overall audit quality is likely to therefore decrease, not helped by the inefficiency of having two auditors.

The CMA argues that there should be a non-big 4 peer review for audits that are too complex for a non-big 4 firm to jointly auditor. This seems illogical, especially as the inexperienced non-big 4 firm will have no liability for the outcome. How different is this from a regulator’s Audit Quality Review (AQR)? What value would the peer review have? The peer reviews would report only to the regulator, but if they are not shared with either the auditor or the Audit Committee, how can the regulator get a balanced view of the value of said peer review?

It is likely that forcing a split between audit and other services would be the most effective and low risk measure to improve competition. This would enable companies to have a fuller choice between the big 4, reducing the times that one or more is ruled out through a conflict of interests.

As the CMA recommends, the regulator should take a close interest in the viability of the big 4 and act early in the unlikely event that one appears to be failing.

The proposals for an operational split seem sensible.

Limiting notice periods and non-compete clauses for big 4 firms seems sensible. The other proposals appear somewhat peripheral. Moving audits to a fixed term of seven years would be unnecessarily intrusive, but there could be a requirement for a tender every seven years. This however should not be expected to have an impact on big 4 market share.

Having the opportunity to clawback auditor remuneration for serious failings discovered later seems sensible and in line with modern corporate governance.

It is difficult to be sure how this would work in practice, but it would be worth trialling for a few smaller firms to see how it works.

This seems harmless, but I’m not sure that there will be significant benefit.

Moving audits to a fixed term of seven years would be disproportionate, but the requirement for a tender could be set at seven years. This however should not be expected to have an impact on big 4 market share.

The Big 4 could be required to initiate a certain level of secondments of staff into non-big 4 players, in order to boost the latter’s capabilities.

They could initiate an operational split between audit and non-audit services. They could also have a code of conduct to facilitate movement of staff into smaller players.

The Government has a major role in lobbying for international action to increase competition and quality, as these proposals cannot work if implemented solely in the UK.

← The Baked Bean Audit Sexing up the statistics. Who needs facts? →