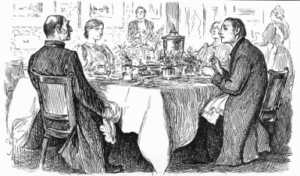 The Curate: “Oh no, my Lord, I assure you! Parts of it are excellent!”

A ‘curate’s egg’ was originally something that is described as having good parts purely out of politeness, but nowadays, is taken as something that is good in parts. Perhaps this is an apt description of the Brydon Report, set up by the government to be a fast review of auditing and governance in the wake of various accounting scandals. The Report has been guardedly welcomed by business, cherry-picking some of the recommendations. The audit profession undoubtedly has looked at it and concluded that it could have been much worse.

The Report presents itself explicitly as the view of one person, Sir Donald Brydon himself, on the audit process. Despite being set up in the wake of accounting scandals, the report itself doesn’t reference these events nor does it claim that its recommendations would help avoid such crises. The recommendations in fact lack tend to lack empirical or evidential bases.

There are over 60 proposals, of which 33 are picked out in the summary. These recommendations range from the significant, such as a Sarbanes-Oxley type attestation on internal controls, to the esoteric, such as having specialist culture auditors, to the somewhat inconsequential, such as putting audit fees on the face of the P&L. The Report doesn’t distinguish between major and minor proposals. There is no prioritisation.

There are far too many proposals to discuss all of them here, but there are two significant proposals; on executive attestation and the audit profession itself.

The Report recommends that the CFO and CEO provide an annual attestation to their board “as to the effectiveness of the company’s internal controls over financial reporting” (2.8.3). This is quite a break with the current role of the non-executive audit committee and the legal ‘fiction’ that all directors, executive and non-executive, bear equal responsibility. However, for that very reason, I would welcome this move. There is such information asymmetry between executives and non-executives that such attestations would ensure that the CEO, in particular, has to put their name to the company controls.

The issue however is less the ‘signing in blood’ by executives, but more what due diligence they have to do before feeling able to sign. Sarbanes-Oxley tends to create vast amounts of checks and forms, sometimes without appropriate risk prioritisation. Brydon swiftly refers the thinking about how it would work to the Audit Committee Chairs’ Independent Forum.

Brydon wants to create a new corporate auditing profession. This would be a major change and disruption, and the implications are not clear for the current audit profession, not least the Chartered Accountants, who coughed up £0.5m to fund the report. It is strange however that the Report fails to consider the most obvious alternative, that of reform to the current professional training, and omits to attempt any costing of the change.

Is this a good idea? I have no idea, since I have never been an auditor and the Report provides neither real justification for the change, nor cost-benefit analysis. It seems doubtful that anybody outside the audit profession will care much one way or another about this proposal. However, Brydon should have provided more analysis and evidence to justify such a significant reorganisation.

There are many other proposals that would generally be regarded as harmless, unlikely to see the light of day or as future boiler plate disclosures. Here are some to give a flavour;

“Clarity and reinforcement of the need for auditors to provide decision useful information to the users of audit reports. Significantly that information should, on occasion, include original information (that is, to say, information not produced by the audited company for disclosure) that is likely to have a material impact on users’ decisions. “ (para 2.1.3)

It is up to a company to release any information which, if published, is likely to materially affect the price of its securities. Directors must ask themselves; would a hypothetical ‘reasonable investor’ be likely to use such information in making their investment decision? So what information would an auditor come across that it believes would be useful in investors’ decision-making, yet the directors believe is not price-sensitive, ie likely to have a material impact on investors’ decision-making? Admittedly, Brydon talks about all users and price-sensitivity relates only to actual and potential investors. However, there still seems a rather fine balance between the auditors releasing information that will have a material impact on users’ decisions and the company not already revealing price-sensitive information.

It’s just not clear from the Report what information Brydon is trying to get at here. He gives no examples to enlighten us. Presumably this is just a threat to make sure management disclose everything that an auditor thinks they should.

Brydon wants companies to publish, well in advance of their year-end, a ‘Principal Risks and Uncertainties’ statement and to actively seek shareholder ‘and other’ views on how this should affect the audit. These statements, published currently in the annual report, don’t seem now to excite much interest from shareholders. Brydon suggests, presumably tongue in cheek, that “Enlightened companies” might host chat rooms to discuss audit priorities (para 9.1.7).

Brydon wants to replace the ‘true & fair’ test in accounts with ‘present fairly, in all material respects’. Whilst the latter lacks the succinctness – Brydon clearly is not a marketing man – it is difficult to see that the change will make any difference. He argues that his wording allows directors to depart from any accounting standard to ensure a ‘fair presentation’. Surely that is exactly what was meant by a ‘true and fair’ override.

Audit Committees to become more transparent with a non-accountancy mindset

Brydon wants the regulators to make clear that audit committee chairs do not need to be a qualified accountant. Indeed: “As more information starts to be audited, a non-accountancy mindset may indeed become an advantage” (27.3.2). This again seems to be a personal opinion without any empirical foundation. Some might argue that the reverse would be true! Maybe he means that there are too many ex-auditors chairing audit committees?

Another proposal is that audit committee minutes should be published, if necessary redacted, but a year to 18 months in arrears. Redactions will need to be agreed with the regulator, ARGA. I bet that will be a popular gig for an overworked regulator. If minutes are an important extra piece of information for shareholders, then a long time delay would surely render them of historical interest only? Brydon recognises the risk that “minutes will become more bland and less informative. Whilst this may be true, the remedy lies with shareholders who should not permit this behaviour.” (27.1.15). I struggle to see corporate governance executives, let alone fund managers, bothering with reviewing old audit committee minutes, let alone having a fight about them. The risk that minutes are neutered, and audit committee discussion restricted for fear of disclosure, is however a significant risk that deserves more consideration than this report provides.

Auditors to be let loose with client information

Brydon does source this recommendation to a piece of, admittedly anecdotal, information. He learned of an audit firm using their audit data from a company to assess cross-selling opportunities. This seems, somewhat bizarrely, to have inspired him to recommend that auditors should be allowed to use their clients’ audit data more to promote better quality audits. No-one seems to have pointed out to Brydon that auditors are increasingly competing with some clients in large areas of data and consultancy. Such companies are becoming more worried about the transfer of information and employees from audit to other commercial services. Finding out that auditors are misusing audit information is not a great basis to advocate more freedom for them.

Audit committees will have to publish a three-year rolling Audit and Assurance Policy to be put to an annual advisory vote by shareholders. The gist of the policy is exactly what a good audit committee report should cover now, together with the relevant terms of reference. Brydon is inspired by his view of the great success of the Remuneration Policy requiring shareholder approval, such success being something that might surprise many directors. No other evidence is supplied, nor apparent shareholder demand identified. The advantage of this policy seems uncertain, but the danger is of another piece of bureaucracy and boiler-plate language.

Change the face of the P&L

Brydon wants a law change to force companies to put their audit fee on the face of the P&L account, as opposed to in a note to the accounts as now. “Publishing the audit fees in this way…would make it unambiguously clear that the fees are costs incurred by the company at the behest of the audit committee and paid for by shareholders” (9.4.6). Really? Who is currently not aware that audit fees are paid by the company, and like all costs, ultimately come from shareholder funds?

The Brydon Report is a curate’s egg. Compiled in a relatively short time-frame, it ranges very widely over governance, audit and accounting issues, resulting in a large number of very variable recommendations. Perhaps, in retrospect, it could be argued that having a report written as the personal views of one person risks not producing the most well thought through and tested set of policy recommendations.

The report also stands as yet another example of what happens when you ask the great and the good to come up with some ideas on a topic in which they have an interest, but no specialist expertise. There is of course nothing wrong with asking eminent people to lead reviews, but there can be a tendency for this to result in a lack of analysis, evidence and insufficient internal challenge (I have reviewed in more depth the procedural issues in this Report in another article).

Finally, one example of the tone of the Report arises when Brydon raises, and then dismisses, the need for any cost-benefit understanding of his proposals;

“I consider that my recommendations for actions to be taken … would not create a significant extra cost other than where work that should be done is currently being neglected. “ (para 28.1.2)

It might have been more encouraging to hear him say that the recommendations may prove expensive, but at least they would greatly reduce the chances of another accounting scandal. Whilst he is right that the proposals are unlikely be hugely costly, he provides no evidence that they will be hugely beneficial either.

‘Not missiles, but microbes’ – Why didn’t we see it coming? →